Remember to bring your suntan lotion because this is officially the sunniest resort in Europe. And if you’re worried about the sun affecting the snow conditions then don’t- Sierra Nevada is nearly entirely covered by an advanced artificial snowmaking system.

Beginners visiting Sierra Nevada will be pleased with the well groomed greens and blues on offer here but the resort is probably best suited for intermediates. The long reds (the longest is 6.5km and runs all the way from the summit of Veleta mountain at 3398m down to the village at 2,150m. Advanced skiers will find some challenges including a men’s downhill world cup run.

For snowboarders there is a well-kept half pipe and board park and some opportunity for freeriding.

Off the slopes there is plenty to do with saunas, a gym, snowmobiling, sleigh rides and plenty of shopping. The après ski is lively and typically Spanish- that means partying well into the early hours- and there are plenty of bars and clubs to party in.

The road to the skiing resorts is always in perfect condition so you won’t require any snow chains or winter tyres for your visit.

The facts at a glance

•Most of the ski area is on the northern slopes of Veleta, the third highest peak on mainland Spain.

•Set in the Penibetico mountain range, within the Sierra Nevada National Park and only 27 kilometres from the centre of Granada.

•There’s a modern artificial snow system that comprises of 353 cannons which covers 35 km of piste.

•The resort is run by a private-public enterprise called Cetursa Sierra Nevada, S.A.

•The 1996 Alpine World Ski Championships were hosted here and Sierra Nevada has been selected to host the 2015 Winter Universiade, the world university games. 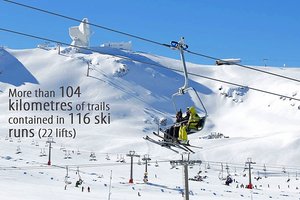 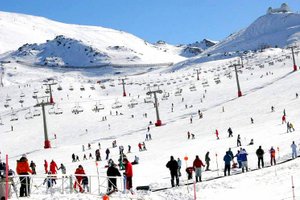 Near the coast and the fashionable Marbella.